“At gigs, she teased the crowd: ‘There’s something I’ve been wanting to tell you for a while … I am a L-L-Lawrence Welk fan.’ In the Advocate interview, she stopped speaking in code.”

Next time you want to tell people you’re a LESBIAN but you’re too much of a Sapphic Scaredy Cat to do it directly, just tell ’em you’re a LAWRENCE WELK FAN.

Thanks to k.d. lang, Lawrence Welk Fan is code for lesbian! See, it isn’t just language-obsessed Sapphic linguists who engage in acts of subversive coding and who create coding parodies to deal with real life hardships; popular, famous songwriters do it, too! Not everyone makes an art of it, but many use it as a communicative tool.

The Langian humor points to a very serious and enduring part of LGBTQ+ history– the need for coding, using words to mean other words, in order to ensure safety for members of the LGBTQ+ community.

For centuries, not just decades, marginalized people have been using language to engage in acts of liberation, acts of defiance, and acts of self-protection. If your safety, or the safety of the ones you love, were on the line, YOU might tinker with language, too. Language would not be something you take for granted; it would be something more significant to you. Language matters because, for many, it is a matter of life and death.

If hiding your identity (as a Jewish person, as a lesbian person, as a transgender person, etc) meant the difference between freedom and life –and– suffering and death, what would you do? Would you come out and say, “Hey; I’m _____________; have at me; bring on the burning crosses and the gas chambers and the brutal police raids and the stonewalling!”

Doubtful: that you would be yourself if being yourself meant being handcuffed, beaten, locked up, or killed.

Hard to know unless you’ve been in that situation, eh? But it’s pretty reasonable to understand that if the consequences were serious, calling yourself something other than you are (or not calling yourself anything at all) might be a reasonable course of action.

Of course, the “what would you do?” question is impossible to answer if you have never been a member of an oppressed community. Yet many of the people who assume positions of authority, in the United States and around the world, are people who cannot even begin to answer this, people who can barely step into the imaginary shoe of someone who has been oppressed and taught to bury who they are since birth. How can we expect figures of authority to protect the rights of the oppressed when those figures cannot understand us because they have no desire to understand us? Public officials with little to no understanding of systems of oppression hold power over those who live the reality of oppression every day: and that is a problem. The solution to this problem is to elect public officials from minority communities, to change this power dynamic and eradicate the imbalance, but it takes time (decades, centuries…).

In the meantime, artists and writers around the world are doing their part, as individuals and collectively, to dismantle and shift this power dynamic by educating the public, lighting the fire of learning, via their art. Which brings me back to the point about why the LGBTQ+ community has had to tinker with language for survival, and why it has the right to subvert and change languages in order to subvert and change oppressive dominant narratives and public policies that erase its histories and make the development of sublinguistic communities necessary.

Many members of the LGBTQ+ community are expert tinkers, linguistic tinkers. Tinker Bells, indeed. We are Tinker Bells tinkering with language until it includes us and until we are safe from exclusion and harm.

Many of us have had to become linguistic tinkers because language has been used against us, used to justify acts that criminalize us and render us invalid in the religious sector, the employment sector, the legal sector, and the home sector.

When people are not safe to be themselves at home or in the world-at-large, they develop alternate ways of thinking and speaking in order to survive.

Thanks to queer pioneers like lang, it’s becoming safer to say, write, and use the L word. But since there are still some “Lawrence Welk Fans” who, for one reason or another, cannot use the word “lesbian” to describe themselves, the reference is still relevant.

Solidarity shout-out/in to my fellow “L-L-Lawrence Welk fans” out (or in) there.

In addition to being one of the best vocalists of the Anno Domini era (21st Century), k.d. lang is a lesbian pioneer. She was hinting at, and directly saying, the word –and even more: making fun of the need to call one L word another L word– when hundreds of thousands of Lawrence Welk Fan others could not bring themselves to do so.

What is most notable is that instead of making her identity as a performer one that would mask and disguise her lesbianism, or one that would compensate for it;  she constructed her performance identity as a deeply and outwardly lesbian one. Her lesbianism is part of her performing identity, in addition to being part of her identity as a private person (the person she is when out of the spotlight). This is a marvelous achievement, one that she began working toward before Ellen came out on The Ellen Show. 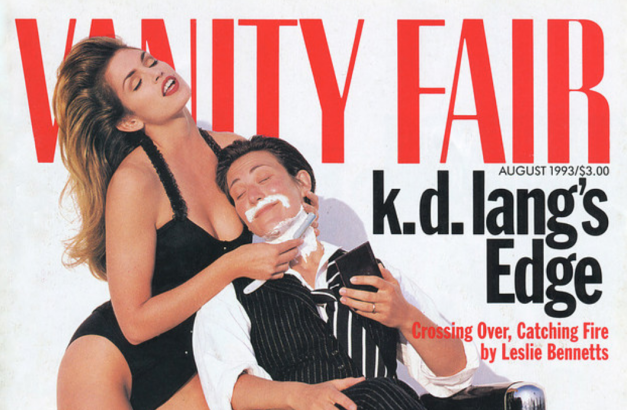 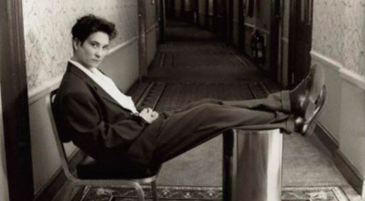 Lang, in addition to being a pioneer on the lesbian front, is also a lesbian pioneer on the gender identity expansion front, making fun of certain gender expectations and traditions and playing with gender expressions, linguistic and physical (Big Boned Gal and Miss Chatelaine are prime examples– her performances engender a shared language, one that the lesbian community understands). She is absolutely still relevant, and that is why she continues to be a subject of global fascination.

Last night, I went to see k.d. lang perform in Akron, Ohio. Lang is traveling around the world on her 25th Anniversary Tour, “Ingenue Redux.” The performance was brilliant, and the musicianship was astounding.

I was in a haze of Sapphic ecstasy until the end of the performance, which she prefaced with a call to love: a call to take the hate of others deep into our hearts and to transform it into love, love that can be shared, because, we all joined her to declare: LOVE WINS. (Love win(e)s, too…)

Love does win. Always. I am not sure how much of the hate of others I can take into my heart right now, but my goal will always be to transform whatever hatred I can transform into love. I’ve been doing it since 2001, and I have no plans of stopping. The stakes were raised exponentially when the hate of others surpassed the threshold of expectation in 2017, costing me nearly everything but my life, but I am alive: that’s what matters, and I vow to work hard for the rest of my struggling days to turn every shred of the hate of others that I carry inside me into love that I can share. If I can’t manage it, I’ll die trying. Right now, though, I’m caught in the “being eaten alive by the damaging consequences of others’ hate” muddle, but lang’s speech about love reminded me of that other part of me, the one I was nurturing prior to 2017 – the one that frees me from others’ hatred and the one that constitutes who I am and work hard to be in this world.

The highlights of last night’s concert, for me, were “Save Me,” “I Dream of Spring,” “Constant Craving,” and the songs she performed from her mellifluous and exquisite unforgettable album, “Hymns of the 49th Parallel,” a tribute to lang’s vocal instrument and to the contributions of Canadian artists. She did not sing “A Case of You” (instead opting for “Help Me,” which was less hypnotic and poignant), but her rendition of Leonard Cohen’s “Hallelujah” was a redeeming moment of pure musical ecstasy for which there are no words or adequate descriptions or replications.

Lang is a great name. It means tall/long. k.d., like me, is not tall. But her voice, and the spirit of love that speaks through it, is mountainous. She reminded me last night that, though beaten down inside me, my spirit of love is just as magnanimous and mountainous. Cheers to lang! And cheers to lang-uage, especially languages of love.

Love magnificently, magnanimously, enormously. Let your love be mountainous because, as lang reminds us every time she sings, hate has no power over a heart that loves.